The Air Force is going solar, and their new solar microgrid is expected to change the way our troops power their missions in the future.

The Air Force Research Laboratory’s Advanced Power Technology Office (APTO) announced this week their forward operating base of the future project. The project is part of a plan by the Air Force Civil Engineer Center to create a totally deployable, self-sustaining power system.

In a Defense Department press release, the government described the complete expeditionary microgrid system as a cost-effective way to meet the long-term energy needs of military forces.

“We learned a lot over the past year,” said Air Force 1st Lt. Jason Goins, project engineer. “We demonstrated feasibility and where to go next in terms of making complete microgrid systems. Pieces of individual equipment have been demonstrated separately, and by combining them into a microgrid we learned how well they worked synergistically.” 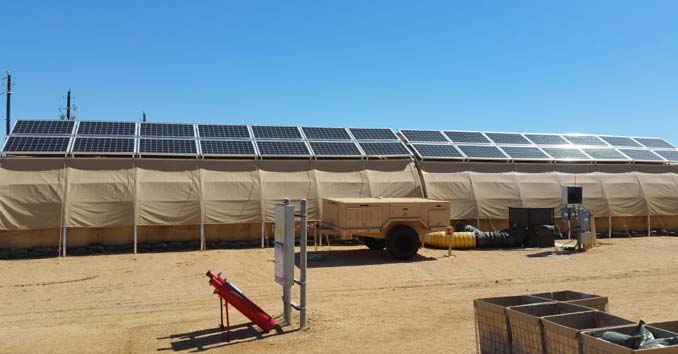 The microgrid system, pictured here during Basic Expeditionary Airmen Skills Training at Lackland Air Force Base in San Antonio, has been being tested over the last year.

Housed in a 10-foot-long trailer, a mobile, hybrid energy storage and management system able to supply renewable energy power for forward operating bases is the latest addition to the APTO-led effort to meet the long-term energy needs of military forces. Batteries and a microgrid command, control and communication software package can act as a power source, better able to supply on-site, mobile energy for expeditionary forces.

“We are taking what we learned and applying it to a rapidly deployable system,” Goins said. “We are looking at something that will be set up and deployed in an hour. If you can power a shelter in 30 minutes with affordable solar and wind, that’s spectacular.”

In addition to providing a reliable, steady source of power, the team is working on other solar technologies like bulletproof solar panels and lightweight wind power packages that can be quickly deployed to make the grid more stable. via offgridsurvival