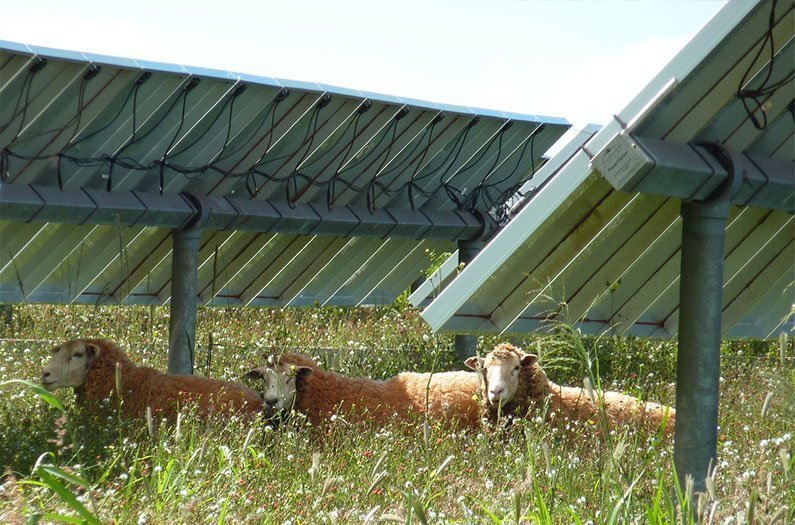 Solar panels could increase productivity on pastures that are not irrigated and even water-stressed, a new study finds. The new study published in PLOS One by researchers at Oregon State College finds that grasses and plants flourish in the shade underneath solar panels because of a significant change in moisture. The results bolster the argument for agrovoltaics, the concept of using the same area of land for solar arrays and farming. The idea is to grow food and produce clean energy at the same time.

Tests of the agrovoltaics concept are now  underway at several spots around the world. Researchers behind these large-scale experiments are testing whether crops can grow just as prolifically in the shade of solar panels as they would under full sun, and are figuring out the best solar panel tilt and arrangements.

The OSU team happened upon their findings by accident. Walking past one of the solar arrays on campus one day, biological and ecological engineering professor Chad Higgins saw that green grass was growing in the array’s shade. So they installed instruments to measure air temperature, relative humidity, wind speeds, and soil moisture in the areas under panels and under direct sunlight. They conducted these measurements between May and August of 2015. At the end of that period, they also weighed the above-ground biomass in the different areas.

They found that areas under the solar panels had a different microclimate than exposed areas. Shaded areas were 328 percent more water efficient, and maintained higher soil moisture throughout the heat of summer. That led to twice as much grass under the arrays as in the unshaded areas. The plants also had more nutritional value. And the researchers also found a 90 percent increase in late-season plant mass in areas under PV panels.

Higgins explains that plants in full sun use their water as quickly as possible and then die, while those in shade are less stressed and use their water slowly. “Not all crops will be amenable to solar management, and the economics of active solar management with PV panels needs further study,” the researchers write. “But, semi-arid pastures with wet winters may be ideal candidates for agrivoltaic systems as supported by the dramatic gains in productivity.”

see also this innovative PV Table with a earth anker